Hush: In Search of Dominic Ward is a co-op, room-scale, virtual reality, escape room experience. Take on the roles of Sam and his/her/their closest friend as they try to unravel the mystery of what has become of Dominic Ward (Sam's Uncle). The players are trapped in adjacent rooms filled with puzzles that will require cooperation and communication. Using the mic on your VR headset, communicate with each other in game to solve the puzzles. But beware. A creature is prowling through the rafters of these cells and it can hear you!

A single playthrough should take 1 to 1.5 hours depending on the players. A second version of the rooms with different puzzle solutions is available as a B-side to allow the players to switch rooms or to show a new friend the game while still enjoying a fresh experience. Each player must own a copy of the game in order to play. Players can join each other's game instances via their Steam friend list or in-game invite system. Microphone usage is required as in-game mechanics and puzzles are used to detect the player's voice. 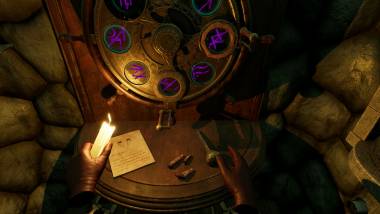