Get ready because the sequel is coming soon:

https://store.steampowered.com/app/1271540/1_Screen_Platformer_Prologue/
The mysterious biological experiment named Subject X95c knows no fear. Her advanced adrenal glands make her adept and testing the temple's defense system for weak points. To win, she must clear 100% of the fog from the temple. Leave no stone un turned.
As commander of the Geodesic Celestial Liberation Front antiquities wing, Nadia Stormhammer must get in and stay alive long enough to rescue the sacred skull of dura'thum. The faster you can get in and escape the better. Honor to those with the best times.
The mission of chief reconnaissance officer Vez Rendoux is to survey the best path through the temple. Grab the holographic nav orbs without getting killed. One mis-step and Vez has to retrace his steps to the last checkpoint and recapture the nav orbs. Collect, survive.


You command a rag-tag team of interstellar bounty hunters as they race for elusive golden skull of an elder god. It is buried deep within the temple of the lava-worshiping cult known as the Guthra-dun. The self-defense systems pulsates and snaps to life as soon as Nadia, Vez, and Subject X95c step foot on the planet.

Are you cunning enough to navigate this tough-as-hell platformer and reach the end.

WHAT IS 1 SCREEN PLATFORMER? 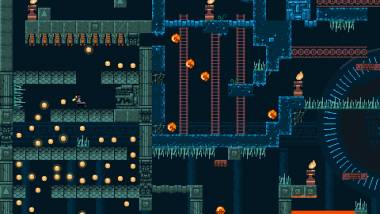 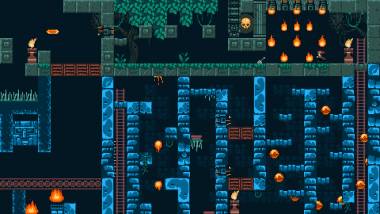